We have been a little late in getting our raised beds composted this year, what with the a certain little distraction.... 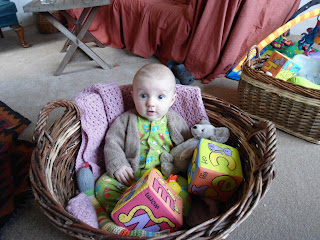 ...so in the last couple of weeks Doug has been seen criss-crossing the garden with wheelbarrows full of compost in one direction, and full of weeds in the other. 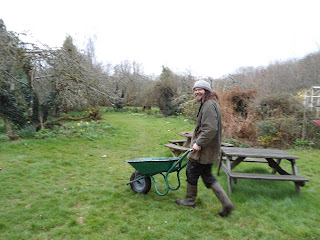 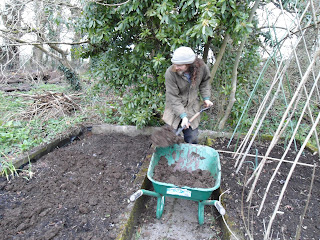 When we arrived here the raised beds were buried under brambles and self-seeded ash and sycamore trees - we didn't even know that most of them were there until we came to clear space and investigate! We discovered 5 raised beds made from concrete blocks, each of around 1m20 wide and 10m long. Sadly, apart from a certain amount of leaf mould and vermiculite, there was no soil in the beds, as the ornamental plant nursery that used to run here 25 years ago was very much of the chemical approach, so these beds were simply lined with mypex with a layer of vermiculite (small pieces of porus, volcanic rock used for it's ability to retain water) and then hundreds of tiny black plastic pots with light seed compost in them. I assume the seedlings would have been raised on a liquid fertiliser.....such a world away from our methods! And fortunately, a long time ago too! 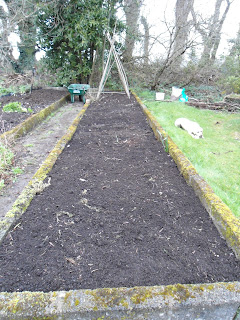 So, we have been composting like mad to try and create enough soil to fill these beds, one at a time. With a mixture of our kitchen waste, garden waste, ash from the wood burners and some locally sourced horse manure, we are making good progress. We now have one bed with a full depth of luscious, dark, humus rich soil. Last year we gave it a heavy dressing of semi rotted horse manure and grew our cucurbits (courgettes, squash, pumpkins, etc) in there. We also experimented with sowing some white clover around the plants as a  living mulch. The benefits of a living mulch include all those of a normal maintenance mulch (weed supression, reducing water evaporation and soil erosion) with the added benefit of adding nutrients and minerals (white clover, being a legume, fixes nitrogen from the air into the soil via root nodes and some helpful micro-organisms) and attracting beneficial insects such as hover flies and bees. As we had plenty of muck on the bed, we didn't particularly need the extra nitrogen, but we felt it was a good time to try out the clover because the cucurbits are very vigorus and were unlikely to be stunted by the clover. More about this below... 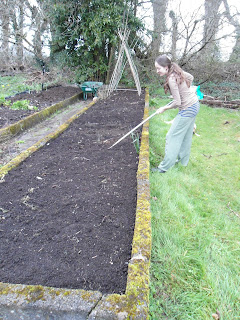 So, bed number 1, the first one we started filling is now looking pretty good. After the muck and clover put in last year, and a little more old compost this year we have a good soft tilth and plenty of humus, so we can now allow the soil ecosystem to develop as undisturbed as possible. Here I am gently hoeing so the bed is ready to receive our salads, peas and beans. We raise pretty much everything in the glass houses before transplanting outdoors, mainly because we have a serious slug problem....as do most of us after the last couple of wet years! In my experience there is very little that can't be raised in pots and transplanted - whatever the seed packet may say. The bigger and stronger the plants are when put out, the better their chances, so although it's a little more work initially, I feel it is well worth it. We have decided not to sow clover on this bed this year, partly because we want to see what comes up from it being in last year, and partly because we want to plant the salads closely, and the legumes will fix their own nitrogen. 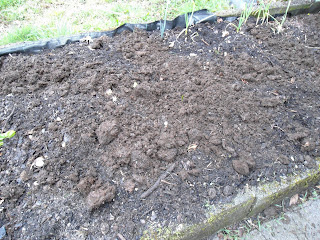 Bed number 2 is also coming along nicely. We will repeat here what we did on bed 1 last year. We have put on a good dressing of semi-rotten muck and coarse compost and will use this bed for the courgettes, squashes and pumpkins. This year we will be growing 'Gem' squashes -small green tennis ball-sized squashes with a succulent flesh similar to courgettes but sweeter (we love them!), and 'Crown Prince' pumpkins. These are the only pumpkins we bother growing at the moment. They do brilliantly in our cool, wet climate and produce large, blue pumpkins with a bright orange flesh, sweet and starchy like Butternut....but easier to grow! 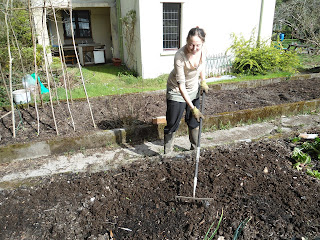 So, after raking in the muck and compost I have broadcast some white clover seed so it can get established before we plant our seedlings. The clover will need to be checked (knocked back a bit) before we plant out so that our seedlings can come away without too much competition. You can do this in various ways, including some rather extreme measures such as torching! We will just crop it with sheers and clear a space of a few inches around each seedling. The clover will be back in force in no time, but the seedlings will have had a chance to get their roots down first. 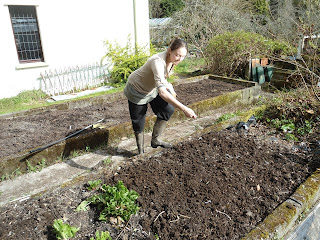 You can see that I am working around some remaining Swiss Chard from last - this will see us through the hungry gap and then come out as its getting a bit tough and knarly now. We also have a few of the last leeks from the winter - the feeble little ones that I always hope might just get a bit bigger if I leave them in a while longer....they never do! 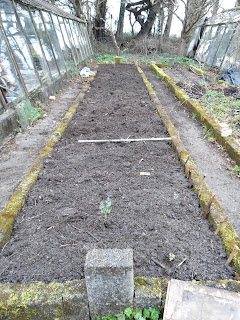 Finally Bed number three. This bed is actually shallower than the other two, but doesn't have the layer of mypex at the bottom, so is effectively deeper than it looks.. For now there are a few rows of rocket, spinach, radish and beetroot which should tolerate the less than perfect soil. To help create some bulk we have used spent potting compost and grow bags (used to tide us over as we got things going), to which we will slowly add more quality material as we can produce it!

To the right of bed number 3 is bed number 4 which we hope to start filling this year. Currently it is a holding bed for various ornamental trees saplings and shrubs we were given as wedding gifts.....amazing how hard it is to find space for things, even when you have 4 acres! 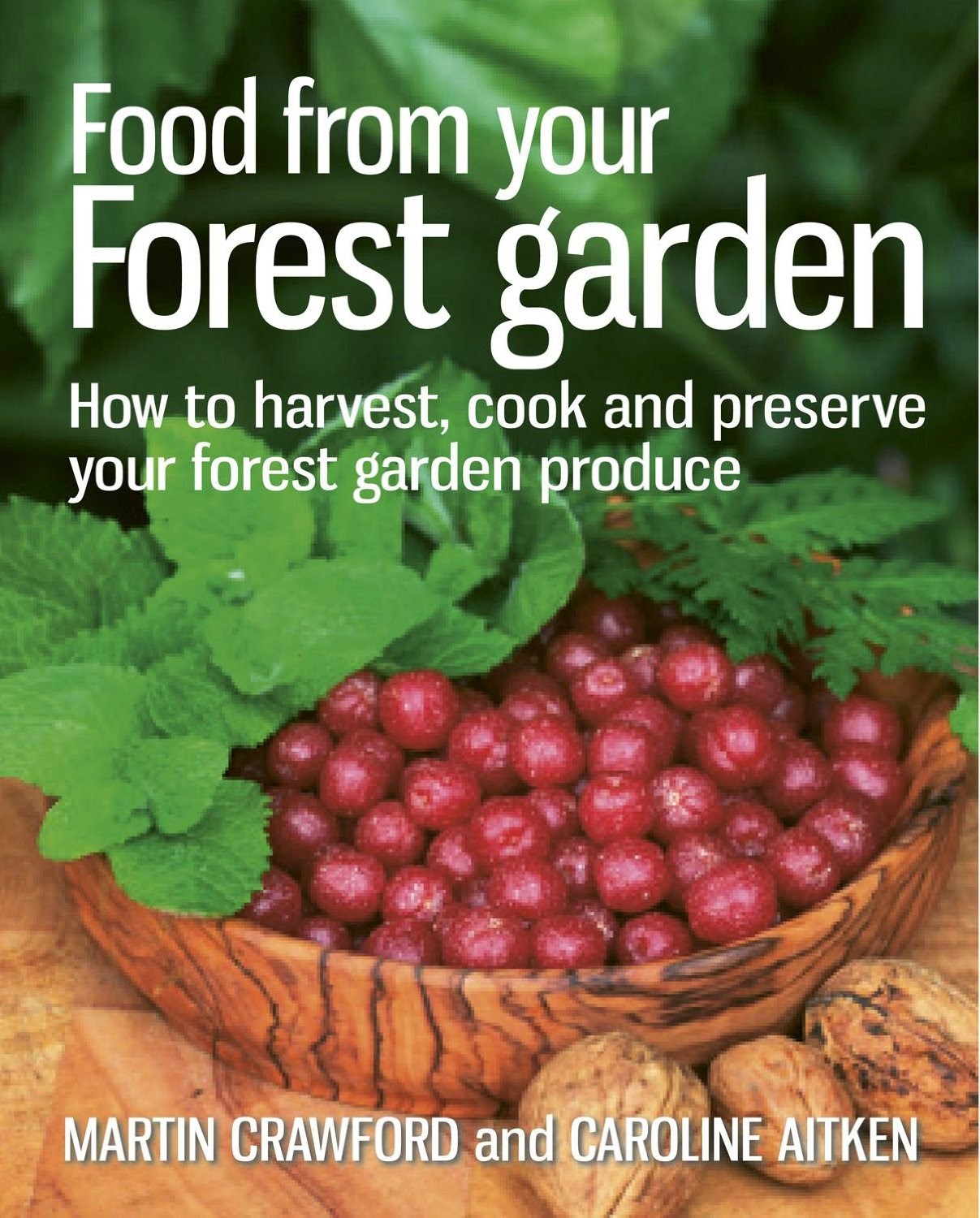